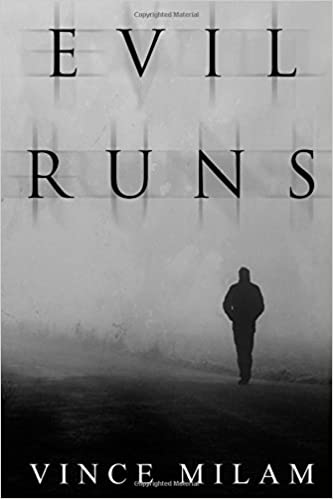 10 Jul Who Doesn’t Love a Fight Between Good and Evil?

Posted at 18:49h in Uncategorized by Morgan James

For me, the cover art is definitely a main factor. If the art is cheesy, I figure the book isn’t going to be any better. That being said, I have to admit to loving a couple of mystery series with covers so “un-artful” that I’m embarrassed for them. The authors spin great webs of mystery and suspense, but in my mind get poor advice from editors who pick their covers. So, I wonder two things. Do I really not know what makes a cover zing? Or, does cover art matter less than I think it does?

That brings me to: Why did I choose to read the indie published novel, Evil Runs, by Vince Milam? The strong title told me right away this is no fluffy romance. That is good for me because I choke on fluff. Evil I can relate to! The book has a well- designed, appropriately dark, shadow figure on the cover—perfect for its declaration that the genre is Thriller/Suspense. Another plus. So, once Milam had me in his camp with his evocative cover and title, I made the leap to sampling the blurb on the back. The plot preview really tipped it for me. I was intrigued and wanted to find out if Milam could bring something new to the oldest storyline on earth: good battles evil. I am happy to report that he does. By George, the man can tell a good tale. The book is skillfully written, well plotted, an all around great read.

You can check out the blurb and the reviews for yourself, so I won’t rehash those here. I’ll only mention a couple of things about the novel that get the story off the front porch and have it “running with the big dogs.” Oh. You aren’t familiar with that saying? Well, it’s a huge compliment here in the South. Think about it. You’ll get it. If you don’t, then bless your heart, send me an email and I’ll explain hound dogs and opossums to you.

First and foremost, the characters in Evil Runs shine. Milam begins with introducing us to Texas sheriff, Cole Garza. He says about Garza, “He kept it simple. Don’t harm others, and don’t take what isn’t yours.” Best advice I’ve heard all year. The reader likes the sheriff from page one. Then, when an horrific murder takes place on Garza’s watch, and the sheriff makes the decision to follow the evil “man” he knows is responsible for the killings, the reader knows Cole Garza is way out of his league. He is out numbered and out gunned, but because our hero is honor bound to try anyway, we are cheering for him. We are also wondering how in the world he can prevail against such evil.

Help comes to Sheriff Garza in the form of a jauntily dressed, French cigarette smoking, Vatican Priest named Francois, who has a penchant for good food and drink, and a computer genius, Nadine, whose social skills may be lacking but whose willingness to track our killer to the end of the earth certainly isn’t. The three warriors band together, vowing to defeat the man known as Moloch, who seems to know their every move as they follow one step behind him. Their quest takes them from Texas to Wales to Syria as the killer strikes again and again. But who is this killer? Indeed, as Francois asks, what is this killer? And how can he be defeated?

How can you not love this story? In truth, written by a less skillful artist, it would be possible not to love the story. A less skillful writer would allow the storyline to collapse into a frayed worn out plot with all the expected clichés. But do not fear! Vince Milan is skillful and his fresh, finely drawn characters bring off the twists and turns of the original plot to a rollercoaster finish.

When I finished reading Evil Runs, I wanted more stories about Nadine, Cole and Francois. The good news is that Vince Milam’s next book staring the three warriors, Pretty Little Creatures, will be released by Labor Day. The author reports our heroes and heroine are global bound again. This time they battle the evils of blood diamonds, child slavery, jihadist, and the Ebola virus. I look forward to reading this next thriller from indie author, Vince Milam.

Hope you enjoy Evil Runs as much as I did. Keep those cards and letters coming and remember, be particular.